An exhibition of Ansel Adams photographs is on at the National Maritime Museum in Greenwich until April 28.

We duly took our eldest, who likes to take the odd photo.

Sadly, the exhibition was heaving. There was neither space nor time to dwell.

So we escaped into the side room showing a 1983 BBC television interview with Adams.

I struggle to think of another artist able to explain their creative process with such easy grace. Grayson Perry, maybe?

Whatever, we were entranced, notably by this clip, in which Adams gets excited about the new creative opportunities about to be opened up by what he terms ‘electronic’ photography.

He had spent his working life slaving in darkrooms and under the hood of quarter plate cameras, perfecting his craft. Yet his mastery of an analogue craft counts for little compared with his excitement about the new frontiers of his artform soon to be opened up by digital technology.

There’s a lesson in there somewhere.

A decade ago I read an article about two men setting out to break the outright world speed sailing record – then just over 45 knots.

They were proposing to build a radical new kind of sailing boat.

There were pictures; a remote controlled scale model, clearly sailing at high speed. 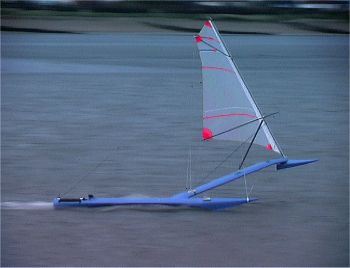 Wow. My inner engineer stirred. The forces on such craft were, at least in theory, as balanced and as aligned as possible. Balanced. Aligned. Zen sailing. Fast.

The piece also included a photo of the two men behind the bid, taken at the 2003 Southampton Boat Show

Last weekend, the man on the right, Aussie Paul Larsen, finally helmed Vestas Sailrocket2 to a new world record of over 65 knots. 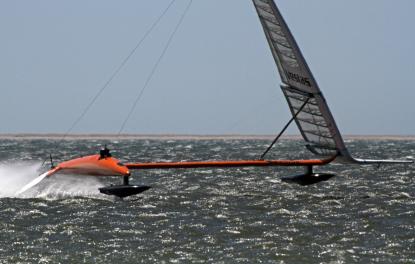 For decades the 500m record had been inching up in tiny increments, fraction of knot by fraction of knot. Assorted kiteboarders were the most recent holders. Sailrocket2 obliterated the record by over 10 knots. Paul, an Australian, put it thus: “We’ve smashed the arse off it!”

You should read Paul’s blog, watch the video and thank Vestas Wind Systems and the team’s other sponsors. The whole project fills me with joy.

But I want to return to the other man in that 2003 photo. He’s on the left in the photo below, wearing a wooly hat. He and Paul are walking back up a Namibian beach. They’re carrying the all-important GPS data logger so the new record can be verified by the World Sailing Speed Record Council. 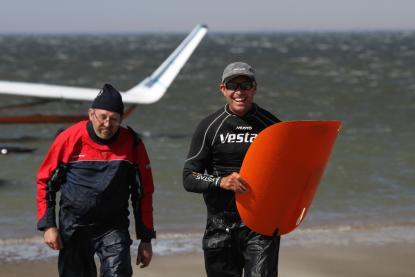 His name is Malcolm Barnsley. He’s a British engineer. He designed Sailrocket2, and she’s very much his baby. Malcolm has spent most of his adult life trying to break the speed sailing record, and for over a decade has doggedly been tweaking and fettling this particular design.

Paul found himself underwater, unconscious, after that one. Many designers would have given up. (Many helms, too!)

You can tell from the photos and videos that Malcolm doesn’t much fancy the limelight. He’d rather be designing foils, or modelling cavitation, the sworn enemy of all speed sailors. He’s very keen on proper attribution, notably for Bernard Smith, whose musings Malcolm has made real.

But the brutal fact of the matter is that ideas are cheap. Malcolm spent a decade making a potentially great idea work.

This wonderful bit of video, shot straight after the record breaking run, is purest engineering valediction:

“All those bloody sums… and all that stuff… it does actually mean something in the end. But you’ve got to do a lot of work to make it mean something. And we’ve done all the work.”

Malcolm Barnsley, I salute you.